A budget phone with good specs, and it's a good upgradable to its predecessors.

Infinix about two weeks ago launched the Infinix HOT 12 smartphones — a trio that includes; the HOT 12, HOT 12 Play, and HOT 12i. The phones are currently available for purchase at Infinix stores and authorized smartphone dealers starting from an RRP of UGX690,000 for the HOT 12 (4GB + 128GB), UGX642,000 for the HOT 12 Play (4GB + 128GB), and UGX590,000 for the HOT 12 Play (4GB + 64GB). For customers that cannot pay the price at once, Infinix is working with TakeNow, a company providing Infinix phones on credit. The customer deposits 30% of what the phone costs and later clear the remaining balance in a period of 6 months.

The Infinix HOT 12 is the newest version in the HOT series — slightly newer than the HOT 11 (version 2022) which was launched in the same month. The HOT 11 (version 2022) is the revamped version of the HOT 11 that was launched in 2021. I would recommend getting the HOT 12 — add a few bucks on what you would have spent on the 11s to get the 12. One reason I could give why you should get the HOT 12 is that it has the ability to expand its RAM up to 7GB or 11GB. The more RAM you have the better performance you get.

Unboxing: What’s Inside:
When you unbox the phone (the boxing is no different from how other Infinix phones come, it’s the same), the handset appears on top and it comes in your choice of color. The HOT 12s come with rich and vibrant color options; Racing Black, Legend White, Origin Blue, and Lucky Green. NOTE: Always purchase your phones from the company stores or authorized smartphone dealers, and always ensure that the seal on the phone isn’t broken to avoid getting cheated.

Inside the box, you have your Infinix HOT 12 smartphone which weighs about 195g, a fast-charging 18W charging brick, standard 3.5mm earphones, a USB Type-C cable, a phone screen protector, a plastic phone case, Xclub card, warrant cards, and user manuals. 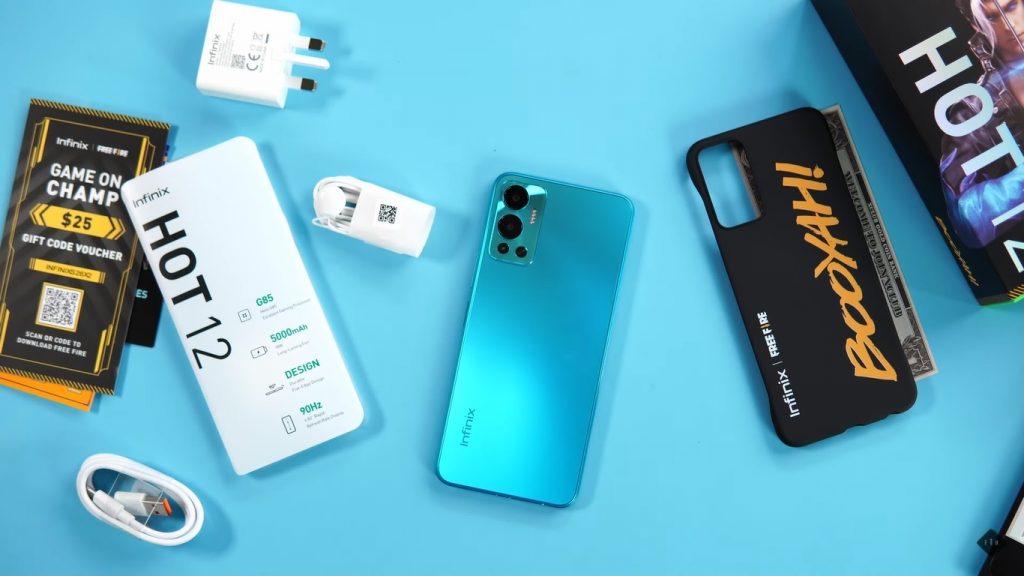 Build and Design
The Infinix HOT 12 comes with a glass front, plastic back, and plastic frame with a flat edge design. The glossy finish at the back can pick up a lot of smudges which will prompt you to clean every single time but to avoid this you can use the plastic phone casing that comes with the phone.

The phone does not have an IP rating so don’t risk dropping it in water. Dust-wise, you can easily clean it off as long as you don’t get your screen scratched (if you don’t have a screen protector on).

The design, the top is plain, the Simcard and microSD card tray appear on the left, on the right you have the volume and power button (the power button is also the fingerprint scanner [the first in the HOT series to have] which unlocks the phone instantly), and finally the bottom we get the 3.5mm audio jack, a microphone, a USB Type-C port [the first in the HOT series to come with the Type-C port] and a single speaker grill which produces/gives, well good stereo sound.

The rear panel has three cameras 13MP (f/1.8 wide with AF) + 2MP (depth) + QVGA, a LED-flash light, and the Infinix branding at the bottom left corner. At the front, we have a punch-hole that houses an 8MP camera and dual LED-flash light. There’s a microphone at the front as well but it is not that visible.

Display
It has a large display, a 6.82-inch to be precise, and as large as it sounds it doesn’t feel that big when you hold it unless you have small grips. But other the display is fine enough. The display is IPS LCD type with a resolution of 720 x 1612 pixels and has a refresh rate of 90Hz which makes scrolling on the phone smooth and swift. The refresh rate can be reduced to 60Hz for longer battery life but we recommend leaving it at default (90Hz) if you need smoother performance.

The user interface is fluid, the quality of the display is fine — the colors look good (sharp, contrast, and saturated — in other words, colors are well balanced) which is very good when consuming media such as watching movies/videos or playing games. The downside and a turn-off of the display — is the phone will struggle when outdoors under direct sunlight. 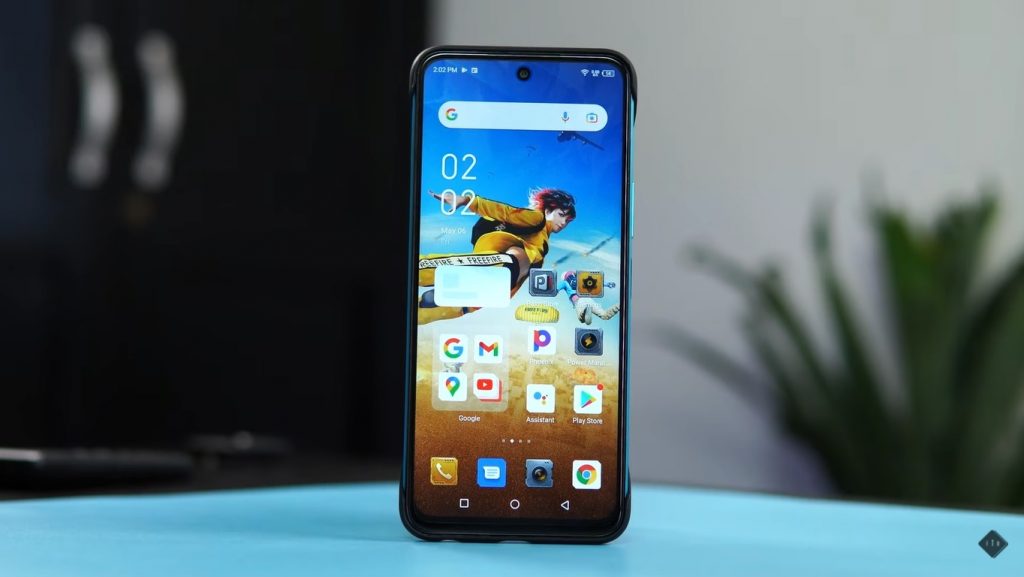 Performance and Power
The Infinix HOT 12 well comes with the MediaTek Helio G85 processor (a gaming processor that works perfectly for this budget phone) which will give you sustained performance and smooth game play-time. Multitasking is good on the Infinix HOT 12 and considering what variant you have, with memory fusion technology, you can expand the RAM up to 7GB, and out of this, you will have more smoother experience. Navigating/switching between apps and launching the apps is very fluid.

When it comes to playing games, a number of them that were played at high resolution, with high graphics and high framerates the gameplay was just fine (lag-free). Games such as call of duty could run smoothly on medium graphics and high frame rates but games with high GPU demand only ran on the lowest graphics which also gave few lags (missing some frames) when playing. The solution to this, if you are a gamer, it’s best to play games that don’t demand a lot from the GPU.

The Infinix HOT 12 runs on Android 12 and becomes the first Infinix smartphone to come with Android 12 (the newest mobile operating system). The OS comes coupled with the company’s XOS 10.6 which has bloatware [intrusive as we have seen on other Infinix phones] and we have to agree that it is annoying while some can be disabled or uninstalled, some cannot — you just have to go with the flow.

The phone is powered on a non-removable 5,000mAh Li-Ion battery that can last about a day on a single if you are not overusing it, and it can go as far as 3 days if you’re a minimal user. And when it comes to charging, thanks to its fast-charging you don’t need to wait that long — you can go from 0% to 60% in about an hour and a full charge can take about an hour and 40 mins. While this time is impressive, the company will need to reduce the fast charge time so consumers can charge their phones to full charge in less than an hour.

Cameras
The front camera on the Infinix HOT 12 comes with an 8MP sensor and the photos taken with it are decent which are worth sharing without editing. The video and audio quality are average and if you don’t think of it from a professional perspective you would be okay with the outcome because there’s no video stabilization no HDR. The same applies to the rear trio camera — photos and videos look decent. The portrait mode delivers amazing photos with good bokeh and good details.

Conclusion and Verdict
The price is fair enough considering the specs that come with the phone. The build and design quality is good. The processor is good as you are able to play games on it without lags (if you play games that don’t overdemand the GPU), entertain yourself, and multitask. The 5,000mAh can last the entire day on a single charge if you’re overusing the phone and charging to full is an hour and 45 mins so no need to wait for over 3 hours to have your phone fully charged.

Being the first Infinix smartphone to come with Android 12 is impressive seeing that the company is keeping up with the trend and evolving. As for the display, we would not have expected something less than 1080p considering that some of the phones today have a display of 4K — therefore lagging behind (with 720p, even on a mid-range phone) is a big con. However, the 720p is still good and we hope to see more improvement in its successor come next year.

The cameras produce average photos and videos under conditions that are well lit but we also hope to see that there is an improvement in the cameras in its successor.

Otherwise, the Infinix HOT 12 is a considerable phone, a budget phone with awesome specs and deliverance is good.

“We are continuously committed to designing intelligent smartphones with excellent performance and trendy aesthetics for young consumers,” Eric Zheng, Infinix’s Product Manager told PC Tech Magazine. “We will constantly bring the latest, best, and most cost-effective products to users.”

We look forward to seeing a new successor next year.

NOTE: All photos used here are by Fred’s Tech Hub