itel Mobiles launched its first phone in the year and it hard to be an A-series smartphone, in particular the itel A58 which succeeds the A56. The itel A58 comes with slight improvements compared to its predecessor —and this includes, the display, a fashionable design, operating system (mobile OS) upgrade, AI-powered Dual Cameras.

While launching the phone, Mr. Henry Kijjo, itel Uganda’s Assistant Brand Manager said, “We pay close attention to our consumers’ needs, and we try our utmost best to provide products that will satisfy and make life easier to enjoy for them. Our latest product, the itel A58 is on par with what our consumers want, and we are sure that they will not be disappointed.”

itel is known for making budget-friendly entry-level mobile phones, and the itel A58 is one of them. The phone comes in a starry black color option priced UGX180,000, in addition, comes with free 3GB monthly MTN data for three months and a 100% data bonus on every MTN data bundle purchased. The phone is available at all itel shops, MTN service centers, and authorized smartphone dealer shops.

itel Mobiles sent us one of the phones for hands-on experience —and the phone is much bigger and heavier than the A56. The last we saw a phone of this kind from the same company was the itel P37.

The itel A58 comes with 3.5mm standard earphones, a charging brick, a USB charging cable that can as well be used as a transfer data cable, phone case, and a screen guard. 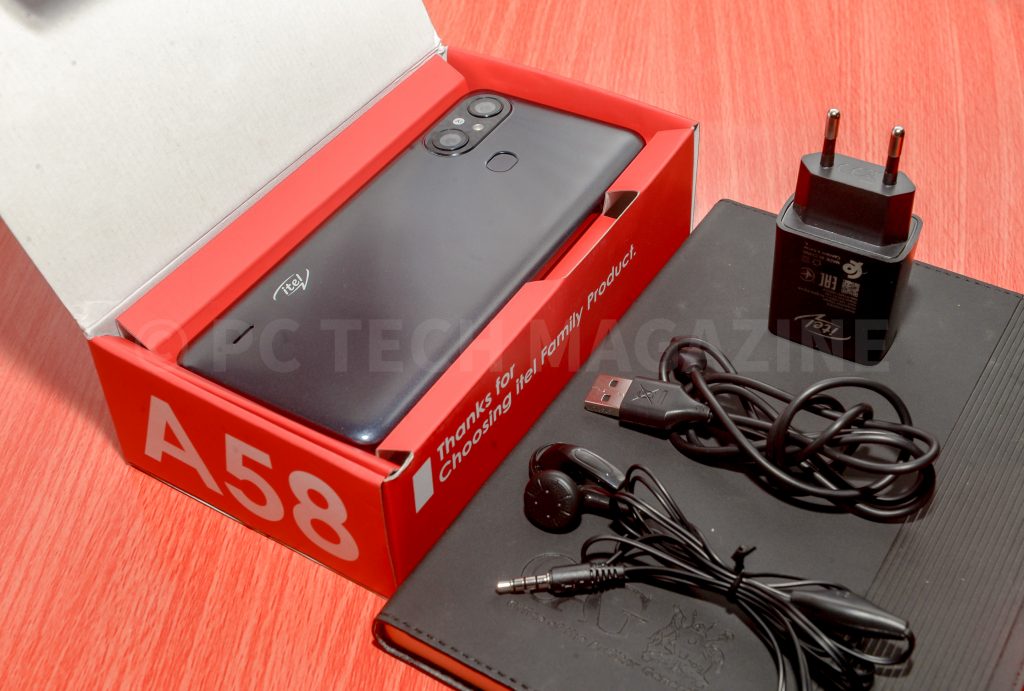 Looking at the specs of the phone, the itel A58 has a 6.6-inch display with a waterdrop notch that houses the 5MP front-facing camera. The phone comes with a screen resolution of 1612 x 720 and a 20:9 screen ratio. The resolution gives a clearer and more immersive visual experience. Under the hood, the phone has a quad-core 1.3GHz processor, 1GB RAM, onboard storage of 16GB expandable with a microSD card, Android 11 (Go edition) mobile OS powered by a non-removable 4,000mAh battery. The rear camera for the phone is a dual setup with 5MP + QVGA powered by AI which is capable of slightly producing better photos and videos compared to A56. Both the front and rear cameras can shoot videos in 720p at 30fps.

While testing it, we received good results, performance was okay if the apps didn’t consume the 1GB RAM at once. A single app of a GB consumed almost the whole RAM, therefore we recommend using the phone with lite versioned apps such as Facebook lite for a good experience. Any app of your choice consuming less than 1GB best fits the phone. There were minimal results on multitasking with slightly heavy apps in the background and bad results giving numerous lags while using heavy apps

The itel A58 is the best fit for first-time smartphone users and consumers with a tight/small budget.