The Camon 17 series is an upgraded version of the Camon 16 series, coming with different features, including the operating system (OS), camera, design, and storage. The phone has received generally favorable reviews, with critics mostly noting the bigger battery, fast charging capacity, and camera performance. The phone has a 48MP AI selfie/front camera, which the company prides itself as the Clearest AI selfie Camera to give owners good photos and videos.

“We understand how important photography is to our customers. Therefore, we have upgraded the Camon 17 series smartphones with not only the clearest selfie camera but also with the best back camera to enable our customers to achieve the best photography experience right on their smartphone,” Mr. Timmy Shen, Tecno’s brand manager told reporters while launching the phones at Century Cinema at Acacia Avenue in Kampala.

We reached out to the company to provide us with one of the phones for review, and they complied giving us the Camon 17 Pro. As mentioned previously, the Camon 17 series also has the Camon 17 and Camon 17P variants. However, the Pro version is much better and we can recommend you to buy one if you’re in a process of buying a new smartphone or upgrading.

With the Camon 17 Pro in our hands, a quick review of the handset, it is larger than Camon 17 and 17P and also has a much faster chipset and processor as well as supports fast charging of 25 watts, a larger storage capacity, and a 48MP front-facing camera. There’s no doubt the Tecno really went all-in with the Camon 17 Pro to make it a perfect smartphone for their customers.

Looking at its specifications, the Camon 17 Pro has a 6.8-inch IPS LCD screen with a display resolution of 1080 x 2460 pixels. The phone comes with MediaTek Helio G95 SoC, Octa-core processor, 8GB RAM, 256GB internal storage. The device ships with Android 11 coupled/topped with HiOS 7.6 which features a phone cloner, document correction, and voice changer. 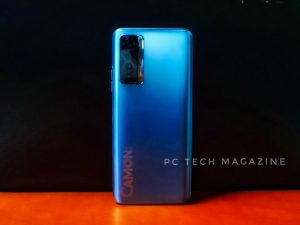 We are impressed with the fast performance, this credit to its MediaTek Helio G95 SoC, Octa-core processor, 8GB RAM. So far as we use the phone, we haven’t noticed any lags, the phone is swift between navigating from one app to another when multitasking.

Other first impressions include; the OS upgrade, bigger storage, camera performance, fast charging capabilities in that you can get a full charge from 0% to 100% in roughly an hour and 45 mins. Finally, the cameras are in a position to shoot videos in 4K at 30 frames per second (fps).