Tecno Mobile last month announced and unveiled its Camon 18 smartphones which include; the Camon 18, Camon 18 P, and Camon 18 Premier that are now available in the market six months after they unveiled the Camon 17 series smartphone in May 2021. While launching the Camon 18s, the company said the phones are pushing the boundaries for what it means to be a professional camera smartphone in anti-shaking and clarity.

At the launch of the phones, Tecno Mobile Uganda Brand Manager, Mr. Timmy Shen, told the media they are always seeking breakthroughs of product and technology to inspire their consumers to unlock the world of possibilities. “The digital revolution with the rise of new generations brings the latest trend of film making through a smartphone device,” he said.

Shen noted that the Camon 18 Premier is the first Tecno product to take Ultra-steady Gimbal Camera technology innovations to create a brand-new experience for users. “With ‘Stop At Nothing’ as TECNO’s brand spirit, we aim to continually make breakthroughs in product and design innovations as we have delivered through CAMON 18 Series.”

The company was generous enough to hand us the Tecno Camon 18 Premier to have a hands-on experience —and right from the touch of the first touch, the body is extremely well built compared to its successor. The body is our first impression on the phone —its sturdy, fits well in grip whether you have small or large hands. Honestly, the thickness of the phone should be 100% liked. 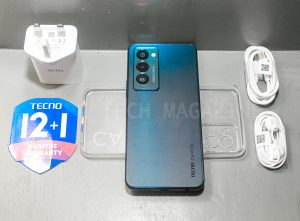 The Tecno phones offer rich retail bundles, and the Camon 18 Premier is no different. The retail box has an abundance of accessories starting off with the 33-Watt power adapter, USB cable, a pair of 3.5mm earphones, a soft transparent case that not only envelopes the phone but its camera island as well.

Finally, the Camon 18 Premier arrives with a thin protective film on the screen. Sure, it may not be as durable as a tempered glass shield, but it’s not as cheap and smudgy as the ones we’ve seen pre-installed on some more popular phones.

Quick Review
The Tecno Camon 18 Premier has an AMOLED display with a 6.7-Inch size screen, 1080 x 2400 pixels, and a 20:9 ratio. It weighs about 200g and has a glass front, plastic frame, and glass back build. The dual-SIM phone runs on Android 11 OS coupled with the company’s HIOS 8.0, has a Mediatek Helio G96 chipset, Octa-core processor, and Mali-G57 GPU.