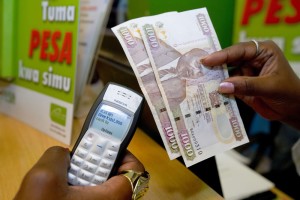 Safaricom and MoneyGram International have entered into a partnership for money to be sent from abroad to Kenya through their money transfer services, targeting more than $1 billion (Sh89 billion) sent in remittances every year.

Safaricom has nearly 22 million users who will be able to receive money directly to their mobile money M-Pesa accounts from MoneyGram outlets in 90 countries.

The partnership is expected to drive growth in Safaricom’s M-Pesa division and boost Kenya’s remittances, a key source of hard currency.

All consumers need to do is visit any of the MoneyGram agents and send up to Sh70,000 ($800) to any registered M-Pesa customer which can be withdraw from any M-Pesa agent in the country.

“This new relationship with MoneyGram enables us to tap into remittances coming in from Kenyans living in other countries,” Safaricom Chief Executive Bob Collymore said.

Pamela Patsley, the CEO of MoneyGram said the partnership marks another step in the money transfer business.

M-Pesa accounts for around a fifth of Kenya’s largest telecoms operator’s revenue.

Latest data from the Central Bank of Kenya showed that the amount of remittances sent into Kenya by its citizens living abroad rose 20.34 per cent in August from the same month last year to $128.8 million, with 49.7 percent of the remittances coming from North America.

Kenyans abroad sent a total $1.3 billion in remittances in the whole of 2013.

Top SEO Trends Everyone Needs to Know in 2021