This years E3 was a smash hit in other words a success. For those of you who don’t know what E3 is – its the worlds biggest and most recognized gaming convention and has all sorts of products and activities ranging from consoles to games and gaming gadgets, to name a few.

This years annual Convention started on the 13th of June till 16th of June, 2017 which was filled with all sort of wonder – from launching new games, press conference, anticipated games gadgets, announcement on new upcoming consoles, and so forth, that kept gamers and the audience entertained.

In my opinion I feel that this was the golden year of gaming we were introduced to so much that its almost like my Christmas wishlist is already full and its only summer. So form consoles to games i’m going to talk about the best of the best of this years E3.

But first, the E3 convention has so many activities but the main events of these conventions are the press conferences. This is where developers announce games hidden from the public or expand on games they have revealed, they also show prototypes and gameplay of some of their games.

Starting with games, this year the line up was amazing it had elite developers such as ubisoft, Activision, Rockstar, Bethesda, EA, and more bringing back and adding to gaming franchises such as Call Of Duty, Assassins Creed, Battlefield, and many others. But in my eyes they were only a few games that stood out to me, the rest of the games were great but only a select few from were elite in my opinion, and so i’m going to rank my top 5 games and give some brief descriptions.

5. Uncharted: The Lost Legacy
As a PlayStation gamer I fell in love with the PlayStation exclusive series of Uncharted and its action adventure genre with alot of plot twists and drama, and this years Uncharted from the trailer all the way down to the gameplay has not disappointed me. When Naughty Dog Studios announced they were going to make an uncharted game that was not based on Nathan Drake(the previous games main character) I was shocked and disappointed, but when they said it was gonna be one of the main side characters it peaked my interest a little. But when they announced that it was going to be Chloe Frazer i was ecstatic. Finally when the gameplay was released and it was smooth and beautiful, I knew that this game would rank in my top 5. The game is full of action suspense and adventure as Chloe hunts for a lost treasure, and this game is sure to be one of the great games to come out of 2017.[related-posts]

4. Days Gone
Days Gone is survival horror game that includes zombies, but this isn’t your normal zombie game. Unlike other zombie games like the walking dead, state of decay, and last of us days gone has a very rare kind of zombie twist too it, and this twist is that the zombies are always in horde and are always together not allowing the player to just sneak by or take them out one by one and because they are so many forget just trying to stand up and try to shoot them cause you’ll probably run out of ammo before they run out of zombies in their horde. The game has an amazing plot and the gameplay looks fantastic with a large open and interactive environment. This change in the zombie genre has given a new light and made the cliche genre interesting again and that is why it is in my top 5.

3. Far Cry 5/Red Dead Redemption 2
It was so hard for me to put one or the other in this spot so I decided to just put both. Both these games have had amazing successors. The Far Cry series has had fantastic games and from everything presented to us at E3 we can tell that Far Cry 5 will not disappoint, the games graphics all the way to its gameplay looks amazing and it still seems to have the action/adventure open world theme that made the franchise so popular.

Now Red Dead Redemption has not had as many games made as the far cry series but its an open world  western cowboy themed game, and who doesn’t want to be a cowboy. The first game was a smash hit and was personally one of my favorite games of the 2010’s, it had a sort of outlaw and sheriff kinda feel to it. It is an amazing game and I would recommend you get both.

2. Assassins Creed Origins
Has become on of the most anticipated games this year, because of its previous franchise success. Set to be released in October 27th, 2017, the Action-adventure and Stealth developed by Ubisoft Montreal and published by Ubisoft is the tenth major installment in the Assassin’s Creed series and the successor to 2015’s Assassin’s Creed Syndicate.

The game continues the struggle between Assassins, who fight for peace with liberty, and the Templars, who desire peace through order.

The game is to be made available for Microsoft Windows, PlayStation 4 and Xbox One consoles.

1. Anthem
EA at the Convention gave the world its first look at BioWare’s new IP, Anthem. While the game was shown running on the new Xbox One X console, it wasn’t clear what other platforms would host the title. However, according to reports by Gamespot, EA cleared confirmed that Anthem would be made available for PS4, Xbox One consoles, and PC, and set to launch in 2018.

Developed by BioWare Edmonton, the sci-fi action game set in a vast open world. The game pits players in the role of a Freelancer tasked with exploring unknown planets and protecting humanity. You’ll be able to outfit your Freelancer with customizable exo-suits called Javelins, which can be equipped with a range of new gear you either craft or acquire.

The game is reportedly said to run in 4K and feature other enhancements when played on Xbox One X.

Honorable Games
These games were amazing but couldn’t beat any of my top 5 to take a spot, but I still think they should be recognized.

ATARIBOX
One of the biggest announcements made this year at E3 was how Atari wants to create a new console. This was major news and sent shockwaves all around, because the last console made by Atari was in 1993 and the rest of their consoles were old school.

This is gonna be a hard battle to fight because of the dominant market held by the big dogs Sony(PlayStation)and Microsoft(Xbox). But to the older generation this can be a throwback to your console days and maybe you’ll support the new Ataribox just like you did its predecessors.

Xbox One X
This year at E3 Microsoft pulled a move that could change the gaming landscape for years to come. And how they’re going to do it you ask, well they’re doing it by introducing the Xbox One X it is been proven to be the most powerful console ever built and is gonna put PlayStation to shame and will probably give Xbox the top seat in the gaming console industry.

Overall Review
The 2017 E3 was a magical event for gamers and introduced the world to many new and wonder full things as we progress further into more advanced technology. And as a gamer i feel that this one of the best E3 conventions ever.

Editor’s Note: Follow the link to see the Games announced at the Convention. (This article some inputs from Gamespot and Reddit)

How to Earn Money From Making Games

The Technology Behind Online Casinos 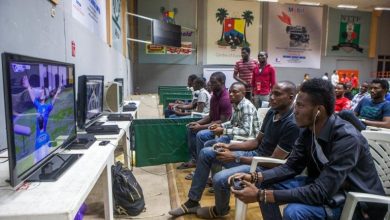 Is eSport Worth Investing in?