Now there’s a wearable device that helps reduce the frequency of farting-induced awkwardness. CH4 (the chemical formula for methane) is a device that comes from a New York-based team, which is running a Kickstarter campaign to bring its idea to the masses.

Simply put, CH4 is a square-shaped device that you can clip onto your back pocket or belt to monitor the gas that passes through your body. In the accompanying app, you can keep track of the foods you’re eating so it can correlate what foods give you the most gas. Based on those correlations, the app will tell you which foods to avoid to reduce your farting. The CH4 Kickstarter page notes that an average person passes gases 13 times a day in normal conditions.

After you place the small CH4 clip-on sensor on the rear of your belt or inside your back pocket (warning: not an euphemism), it will start keeping a daily log of your flatulences. The sensor communicates via Bluetooth with a companion iPhone app (an Android version is in the works) that helps you log your food intake, categorized by food type, and correlates it with the number of times you’ve broken wind for the day. For the sake of user friendliness, your daily “magic number” is displayed along a handy color-coded dial. 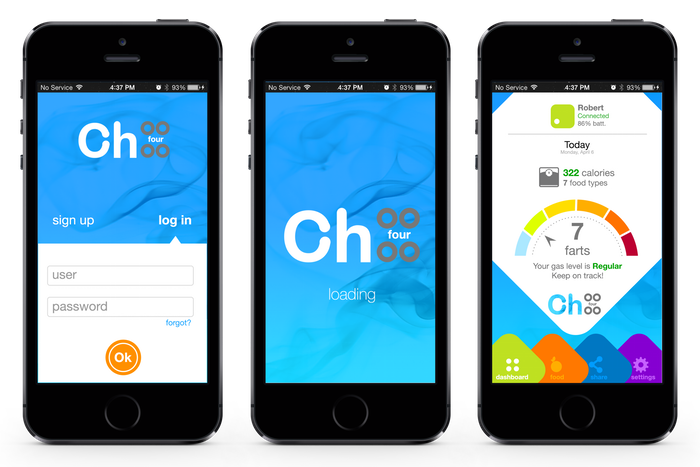 With time, the numbers will correlate to the different food types. By then, you’ll be able to tell which foods are office-safe and which ones you should definitely avoid on a first date.

“I really believe that CH4 is a great solution for a real problem that nobody speaks about,” according to Rodrigo Narciso, the graduate student at New York University who created CH4. He says while the first stage achieved a working 3D-printed prototype, the next stage will be about designing a smaller enclosure, reducing the size of the circuit board, improving the battery life, and making the app more user friendly.

CH4 isn’t just about saving users from embarrassing social situations; it’s also meant to help users avoid the abdominal pain and discomfort that comes with being gassy, according to its crowdfunding page.

Fitness Technology 2017: Still All About the Wearables

5 Things Wearables Have Taught Us About Ourselves