The internal affairs ministry has introduced an SMS platform for Ugandans seeking to know the status of their national identity cards.

The provision, however, only applies to people who registered in 2010 during the biometric registration exercise.

According to the ministry, which is in charge of the ongoing national IDs distribution, the move is aimed at easing the distribution of the national identification cards.

“When one wants to check for the status of their IDs, they are required to type the word ‘Uganda’, leave a space, type the registration number from the Electoral Commission and then send to 8888,” said Bwesigye Marcellion, the National ID project manager. The SMS will cost sh220.

John Eresu, a National Citizenship and Immigration Board member added: “When you SMS your details to that number, it will automatically tell you the status of your card.”

The officials said many people have been bouncing at ID distribution centres when they fail to access their IDs due to errors. They added that with SMS, they will be notified whether their IDs are valid or not.

Since Monday, when the ID distribution was launched, many people have been continuously turned away by the officials after their cards are found to be missing, while some have errors such as misspelt names and wrong dates of birth. 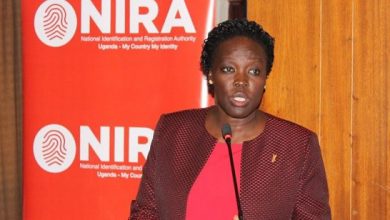 Next NIRA Boss Should Have an IT Background, Museveni