Infinix Mobility every year releases a new phablet for its Note series. Now has a new model called the Infinix Note 5 that was official launched in Dubai last month, which targets users who are looking for a large display to enjoy content on, photogenic’s, to mention a few. It’s priced pretty aggressively at UGX769,000, available in all Infinix stores, as well as authorized mobile phone shops country wide.

The Note 5 is part of the Android One program, designed to deliver an unadulterated software experience by Google – encased in the beautifully designed hardware, bringing security and Artificial Intelligence to its handset holders.

Infinix decided a whole new redesign and build for the Note 5, as we shall find out in the review. Asides from Android One being one of its biggest features, we are to see its 6-Inch Full HD+ display, battery life, camera performance, and so forth.

PC Tech Magazine received a blue variant from Infinix, however, the smartphone is also available in black, and red color variants.

Design and Display
Inifinix sent us a blue unit of the Note 5, which is really slick, and fairly light – I might say. The blue matte finish on the sides give a good grip, and doesn’t attract fingerprints too much. The Note 5 contrasts well with the 2.5D curved-edge display. The display as one of the major highlights of the phone measures at 6-Inches with a full HD+ resolution (1080 x 2160 ) and follows the 18:9 aspect ratio, so it’s taller with slim borders on the left and right.

The screen is bright, and as seen its contrast is balanced – where the colors really pop up very well on the screen. The shadows, and the highlights show up very well giving good results will watching videos.

The power and volume buttons, as well as the simcard (supports two nano sim cards) and microSD (of up to 128GB) card tray on the Infinix Note 5 are textured well, appearing on the right hand side of the handset while nothing appears on the left and top. On the bottom there’s a 3.5mm standard headphones socket, a microUSB port, and a mono speaker.

On the front, there’s a notification LED near the 16MP camera, an earpiece, and support LED light used for low-light selfies. The back of the Infinix Note 5 is the Poly-carbonate plastic covered that can be confused for glass. A non-removable 4,500mAh battery, even though the design seems to suggest otherwise. There’s a center-mounted fingerprint sensor which on its predecessor appear at the front.

While we thought the Note 5 would come with dual rear cameras, we were wrong as only a single 12MP camera is seen at the top-center a redesign from its predecessor where it appeared in the center. The camera is horizontally aligned with a 3-LED flash light seen on the left just asides the camera.

The Poly-carbonate plastic choice wasn’t a bad idea at all. Dust, water, fingerprint remains can all be cleared off, and will look as nice as new. However, the down side is that it is prone to scratches. This can be solved by using the rubber casing that comes with the phone. While many might not like phone casing, to avoid scratches on your phone, the casing would be the best option.

Performance, Storage, and Battery Life
The phablet we got from Infinix had 3GB of RAM and 32GB of internal storage – which is expandable up to 128GB with a microSD card. The Infinix Note 5 is powered by an Octa-core MediaTek Helio P23 each of the 8 ARM Cortex-A53 is clock at 2.0GHz of speed. The MediaTek 6763 gave better camera performance, which is so essential to most handset holders. Users always consider the camera as a essential tool when purchasing a smartphone.

The interface ran smoothly, even with various transition animations. We didn’t notice lag while using the phablet. Even at switching between apps, and scrolling through heavy webpages in Chrome. Overall, the performance is average and this reflects in benchmarks too. However, gaming apps () took a little longer to load than usual. We tried popular games such as Asphalt 8, Need for Speed, FIFA, but the experience was fair, since we noticed it was skipping some frames, and automatically dropped graphical details. But asides from these heavy games, average and minimal games played very well, and loaded much faster.

While the Note 4 was backed on a 4,000mAh non-removable battery, Infinix decided to increase the battery capacity on the Note 5 giving it 4,500mAh of life, which typically gives a 3 full day worth of usage on one charge for minimal users. While Infinix claimed the battery would last 3 days for average users, we tired it out and it wasn’t the case as it would take a maximum of 2 days which is still not bad considering the fact it was on a single charge. Oddly, it did fare well while we watch and played videos on it, lasting about just 7 hours.

The phone comes with the quick charge compatibility, that can at least give you up to 30% of battery life in an hour.[related-posts]

Software
Well while we were used to Infinix’s own custom OS skin dubbed the Hummingbird XOS, well flocks that could be the end of the skin on the Note series. Infinix Mobility partnered with Google on its Android One Project with the Infinix Note 5 being the second phone from Transsion-Holdings owned to join the Project. Infinix ditched its XOS UI from the Note 5 since its part of the project, that requires no skins built on top of the OS. With this, we are saved from pre-installed application from Infinix that we couldn’t do away with because we couldn’t uninstall them.

However, on the Note 5, Infinix managed to leave the XClub, and the Carlcare application but gave users an option of uninstalling them. But the two apps in my opinion are essential. The carlcare app is more of like a customer care app while the XClub is more of a social networking platform for Infinix users.

Cameras
The front, and rear cameras give quite awesome shots. The Infinix Note 5 features a 16MP, and 12MP sensors for the front and rear cameras respectively. Because of the Android one project, it does try to give high quality images. 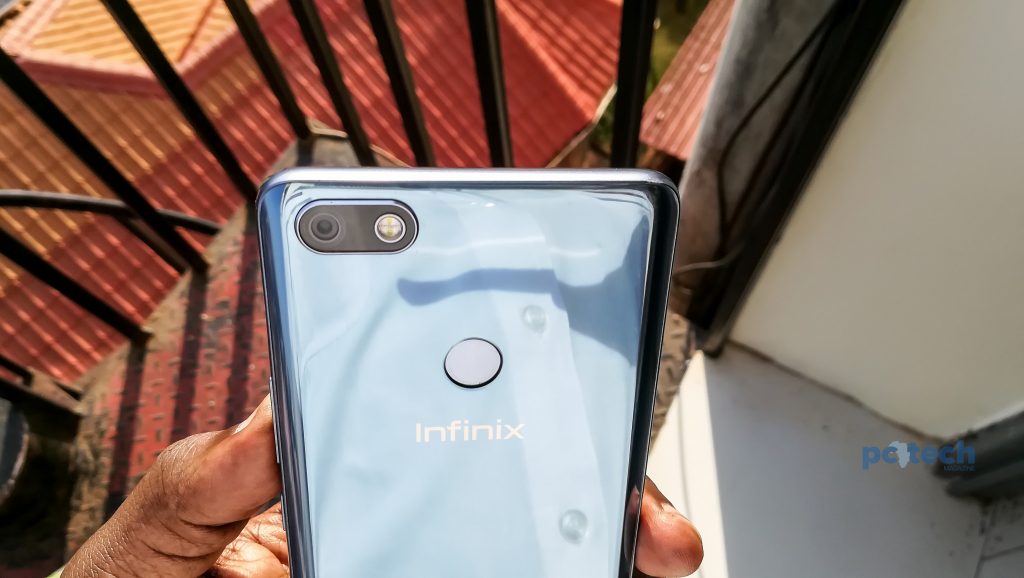 The shots we took appeared less detailed, and had too much noise. If shot under the professional mode with the rear camera, perhaps you would get better photos. The rear camera also comes with the Normal, Beauty, Video, Panorama, Burst and Night modes. Overall, the shoots appeared average. The less details, and noise can’t be seen if not zoomed in to study the photo.

The front camera at 16MP also gave average shots. Comes with features such as the bokeh mode that focuses on the subject and blurs out the background. The front camera is supported by an AI Bokeh algorithm which allows it to adjust and create the perfect focus for any photo. The beauty mode on the other hand will automatically enhance the beauty of your skin and face in a snap. Based on infinix’s deep learning Algorithm, the front camera can capture 255 facial points. It learns how people perceive beauty for a certain sex, age and skin tone in different countries to automatically perform a variety of color adjustments and skin smoothing to produce results tailored to the specific user.

Google Assistant has been embedded on the home button. The user longer presses it (home button) or they can as well tap the google search widget microphone to activate the assistant. While opened, you can issue a series of voice commands or ask questions and expect a direct action or answer.

On the other hand, Google Lens is an awesome feature as well. The feature helps users identify things like animals, objects, text by extracting it, and so forth. If used on things like clothes, shoes, gadgets, it’ll be able to identify the product, and be able to pull relevant shopping results and recommend shopping places. For animals, or plantation, it can tell you what species and classification the animal or plant is.

Final say!
The Infinix Note 5 is a good phablet from Infinix and I might say it is worth UGX769,000 you would pay for it. It’s awesome that Infinix decided that the flagship be part of the Android One Project ditching its XOS UI, which many loved because of the annoying pre-installed applications. With the large displays, the mobile OS, the A.I powered cameras, and features; Google Assistant, and Google Lens, I would recommend it to users that would want to upgrade, as well as first time users.