The compute stick, the USB computer, media stick or whatever you want to call it, is becoming a new device platform of its own. The little devices plug into the USB port of any screen and turn it into a computer.

Lenovo is the latest company to join the market with the Ideacentre 300 Stick, after Google and Intel released similar products earlier in the year.

The Ideacentre 300 Stick will retail for $129 and will be available online and in retail stores from July. The device is much the same size as a traditional USB stick but packs a lot more power.

Simply plug the device into the USB port on the back of your TV, connect a wireless keyboard and mouse and you have a fully functioning PC. The stick houses an Intel Atom Z3735F processor, 2 GB of RAM, 32 GB of flash storage and runs Windows 8.1 (with a free upgrade to Windows 10 on July 29).

These specs are identical to Intel’s product the “Compute Stick,” which it launched in January. They both also have a micro USB port for power and have Wi-Fi and Bluetooth 4.0 connectivity. In fact, the only real difference between the products is that the Intel version takes a microSD memory card, whereas Lenovo’s product uses a full-size SD card but the Compute Stick costs a bit more at $150. The two sticks also look very similar, with vents on the plastic casing to try to prevent overheating.

We’re likely to see a few more companies at least try the format. It’d be interesting to see what an Apple version would look like. That may be a while as of yet, but for now, it would be great if someone could come up with a standard name for the little devices! 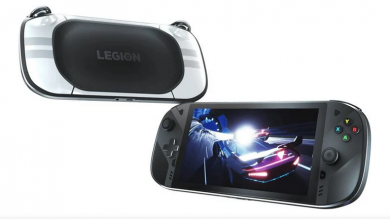